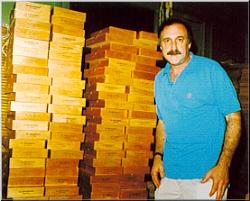 The Cuban Government places secret codes on the bottom of each box of cigars. As of January 1999 this code has just been changed. Above is the new code. Example: A box marked ECA UDCC, indicates manufactured at the Jose Marti factory in July of 1999.