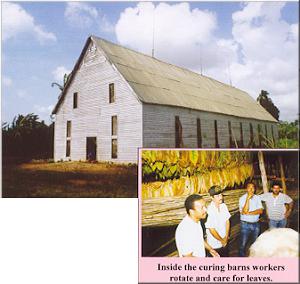 THE TOBACCO BARN
After harvesting, the leaves are brought to curing barns. These are called Casa del Tabaco. These are large, tall, airy building where the tobacco is cured or dried. The tobacco barn is build so the front is facing due North. This allows sunlight to travel across the roof of the building in an East to West direction. This helps to maintain a uniform temperature inside the barn.

CURING TOBACCO IN BARNS
The leaves are tried into pairs and strung onto long poles. These pairs of leaves are called palmas. The palms are hung on poles that are progressively moved to the top of the drying barn. The entire drying process takes about 45-60 days. During this drying period, the leaves turn from green to yellow to dark brown. During the entire drying process the leaves are carefully watched so they will not try too quickly and lose their precious flavor giving oils. Workers keep a close eye on the ambient temperature and humidity, as well as rainfall. Doors and shutters are opened and/or closed accordingly. 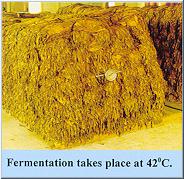 When the leaves are cured or dried, they must be fermented. This is usually done twice, with the exception of leaves destined to produce the Cuban Cohiba which is fermented three times. Two fermentation’s take between 30-90 days depending on the class of tobacco. In the process the leaves are carefully and individually laid upon each other into a pile.

The pile is called a burros and is covered with cloth. Tobacco is moistened to 25% – 30% humidity. This reduces resins in the leaf and they attain a uniform color. In the second fermentation the leaves are moistened with a proprietary mixture of water and tobacco stems. This is a more aggressive fermentation which removes odor and some gases. This reduces ammonia and nitrogenous gases (molecule of nicotine).

BALES OF TOBACCO
The cured or fermented tobacco s then packed into large bales. The bales are wrapped in burlap. They are then brought to factory warehouses. The leaves continue to develop in bales and mature for as long as they are stored.

Pre-1992 Dominican and Cuban tobacco bales matured and developed for three to five years. With the current demand on premium hand rolled cigars this time has been greatly reduced.